Sir John Kirwan, All Blacks wing great has noted that he doesn’t believe George North is in form to feature in any test. 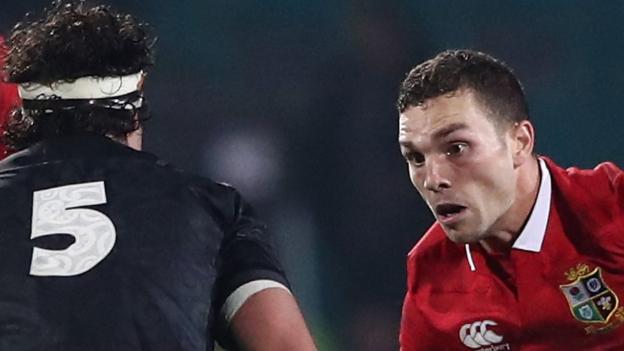 He however states that Warren Gatland, Lions Coach believes the Wales Rugby Team winger can deliver. Kirwan also adds that North must perform at the Eden Park or be booted out by Gatland.

“I don’t think George North is in form, but Warren Gatland knows that he can deliver,” said Kirwan.

“I think he’ll give North one Test and he needs to show some of that quality in that first Test.” he added.

Back in 2016 when Wales toured New Zealand, they lost out on all three Tests. However, one positive to be taken out of the games was North’s performances which remained a bright spot for them.

“Last year when the Welsh were here he cut us up… I just think he’s got the quality,” said the 52 year old Kirwan.

In their victorious 2013 tour to Australia, the 25 year old started all three Tests and scored two tries.

However, he was not involved in the final midweek game played on Tuesday in Hamilton which saw the Lions maul Chiefs 34-6.

He sure must have been kept fresh in readiness for the Saturday Test opener in Auckland along with the Welsh full back Leigh Halfpenny and England wing Anthony Watson.

Also to be included in the squad for the match day Test is England wing pair Elliot Daly and Jack Nowell after they put down markers against the Chiefs with Nowell scoring a try double. Liam Williams who features for Wales at full-back or wing position won’t be left out.

By 20:00 BST on Wednesday, 21 June, the Lions will drop the list of their squad for the first Test.